The community of Woodville now has a lasting memorial to those who served their country in times of war and peace.

The Woodville Monument of Honour, containing the names of the men and women of the community who served in conflicts from World War I to the current mission in Afghanistan, was dedicated at a public ceremony Saturday, November 8, 2008.

Woodville resident Christina Bigelow, who serves as Honorary Chaplain of Ortona Branch No. 69, Royal Canadian Legion in Berwick, was the driving force behind the construction of the monument and, with Branch 69 chaplain Ian Robb, officiated at the Legion’s ceremony of dedication.

“The community club had talked about it, but no one was really ready to head up the project,” Bigelow said following the dedication. “I have a love of veterans deep in my heart, so I decided to take it on.”

Bigelow spearheaded a community committee that worked for six months researching the names of Woodville and area residents who served in various conflicts.

“I sent in my proposal and it was accepted,” she said, adding, “my biggest thing was that it be not only a monument for the fallen, but also for the veterans who came back alive, and for those who are still alive today.

“We remember the fallen, and those who died in the service of their country, but we don’t always recognize the veterans that are still with us,” she said.

“It’s important we honour the living as well and the sacrifices they made, and it’s just as important that we do it now while they’re still here to be part of it.”

In all, there are more than 80 names inscribed on the monument, from World War I veterans to three young Woodville men who have served in Afghanistan, including Bigelow’s own son Tim, who recently returned from a seven-month tour of duty.

“The Legion was 100 per cent behind the project,” she said. “Mark Parent got us $5,000 in provincial money through the Democracy 250 fund.” The community raised the rest.

Asked how she felt as the monument was dedicated, Bigelow, who has spent more than 30 years in one form or another of community service, said, “of all the things I’ve done, both here and elsewhere, this has been the most rewarding.”

Elders caretakers of the past.

Of the many people who assisted with the project, she made special mention of Doug Hale and Marjorie Carty, “both of whom have lived in this area their entire lives,” and were who invaluable in helping research the names of local veterans, both living and dead.

“Our elders are the caretakers of our past,” she said. “I encourage other communities, if they’re considering doing something like this, to do it soon before their legacy is lost.”

Woodville resident and Cornwallis Square village commission chair George Foote, a former member of the Canadian Air Force, is one of those whose name is on the monument, as a Cold War veteran.

Asked what the dedication means to the community, Foote replied, “it means all these people aren’t forgotten, and won’t be forgotten.”

Foote credited Bigelow for spearheading the project. “We were only going to do this once,” he said. “We wanted to make sure we did it right, so it would do justice to our veterans and to their memory. Christina has done a tremendous job.” 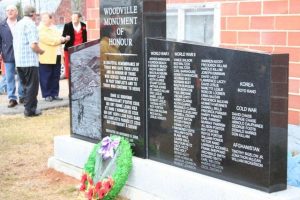 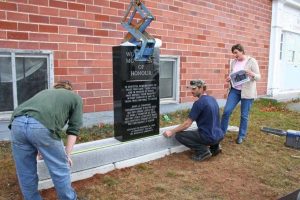 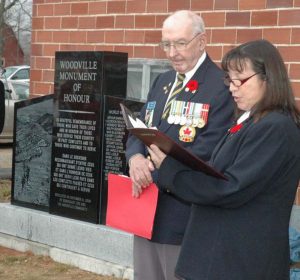