“Woodville occupies its place in the fertile Annapolis Valley, nestling into the North Mountain and providing a home for about 200 people. A landscape of orchards, pastures, cultivated fields and well-kept homes may be what one first notices, but Woodville is also a vibrant active community of citizens who have discovered how to support each other, have fun, who know how to work together.” (this is a direct quote from Jim Morton, MLA Kings North, in his Letter of Support for Lieutenant Governor’s Community Spirit Award submission).

In 1864, when the public school system was introduced to Nova Scotia, the law required that school sections be given names. A group of citizens met at the Kinsman store and decided to give the community the name Woodville in recognition of Samuel Wood, who bought land in the area in 1812.

A post office was established in 1871 in the store which was located on the corner where Boates U-Pick is presently located. A new store, included a post office, was built on the northwest corner of Bligh Road in 1915. Woodville was wired for electricity in 1936 (taken from Hazel Foote’s book “The Homes of Woodville” 1997)

The big brick building that is now the Woodville Community Centre was built in 1943. The structure is situated on the east side of Bligh Road and was built to replace a school that was destroyed by fire in February of 1942. This new school was large for the time; three classrooms, two cloakrooms, a library and a lab upstairs. Downstairs there was a kitchen, an auditorium, and two washrooms.

Grade Primary through Grade 10 attended. In 1952 Central Kings opened in Cambridge. Grades 7-12 were bused there. In September 1961, the Woodville school organization expanded to include the word “community” in its name. It was still focused primarily on raising money to support the school but also the local hospitals in Berwick and Kentville. In May of 1967, the group changed the name to the Woodville Community Club. During this time, the group sponsored a Girl Guide and Brownie group. The Woodville School Section No. 26 closed in June of 1971. The community group purchased the building from the Municipality of Kings in January 1972 for $1, and an annual fundraising strategy was needed to maintain the building and the activities it supported.

The idea of a chicken BBQ came about. The first BBQ was held on Apple Blossom Sunday in 1972 on the property of Keith and Charlotte Boates. This has continued to be the main fundraiser for the community and is well supported by community members. At the 41st Annual Woodville Chicken Barbeque held in 2012, 3800 sides of chicken were cooked on pits in the Boates’ yard.

The WCC became more active with card parties, suppers, 4-H, clubs and dances. The period from 1975-78 saw many changes at our hall. The two front classrooms were made into a large upstairs area and the other classroom became a kitchen. The name again changed a last time in 1986, to the Woodville Community Centre (WCC). The building has seen more renovations over the years. In 2000, the fire escape entrance on the north side of the building was extended and a new entrance, stairway and elevator were installed. This made the building accessible friendly for wheelchair users and seniors. The bricks and plaques in the new lobby are a reflection of the donation support to this project from the community.

In the fall of 2008, a generous donation of exercise equipment from a community member gave us a new idea; the vision of creating a fully functioning gym to encourage fitness and well-being for people reluctant or unable to use commercial alternatives. This space has proven to be very popular in Woodville and surrounding communities with over 200 members from youth to seniors. The gym project, opened in November 2009, includes the provision of a keyless entry system for security and ease of access, showers, and warm-up area.

We are proud to have a presence on the World Wide Web to display our community. Please note that the website is going through many changes and additions as we continue to provide information to the residents of Woodville and those who participate in Community events and activities.

On Saturday, May 5th the Woodville Community Centre to celebrated the completion of the new upstairs meeting room and the 450 square foot addition to our fitness room.

Our fine Community Centre is now 75 years old and was originally built as a school in 1942-43 to replace a smaller school that had just burnt on the same location. School classes were held in this building until 1970, and in 1972 it was purchased (given) to Woodville by the County of Kings, and used as our Community Centre since then.

Various structural improvements and facilities have been incorporated into the original building since it became a Community Centre 45 years ago. Some of the more recent changes are; main lobby & elevator (2000), new playground equipment (2007), fitness centre (2009-2010), generator, kitchen/washroom improvements, emergency comfort station (2012), new upstairs windows/blinds & heat pumps (2015), plus this latest building expansion that was completed in March.

Report on Woodville Community Centre's Opening Ceremony and Dedication to George Foote. May. 5, 2018. 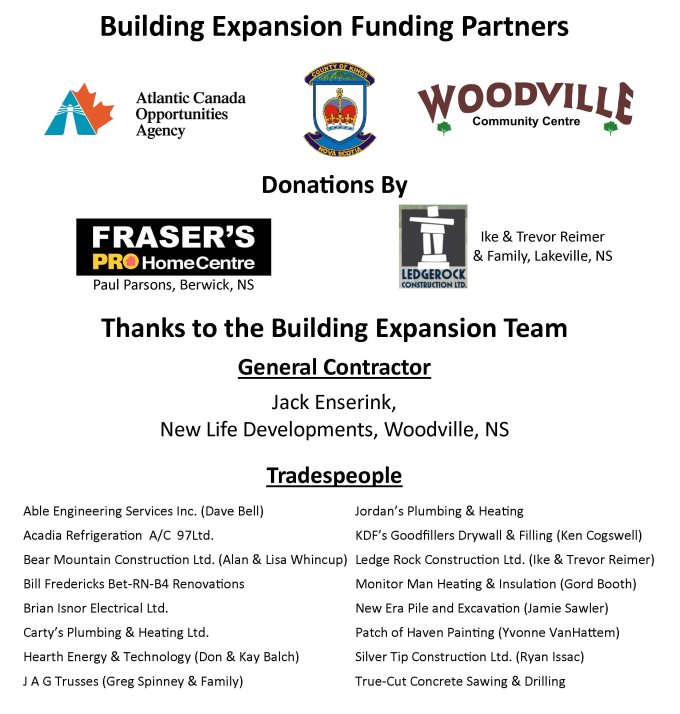